Living on the edge - Deepti Asthana

In the dim morning light, I heard fishermen singing loud as they pulled a heavy net. They formed long human chains on both ends. Soon, the sun became unbearably warm and their bodies were covered with sand and sweat. After a couple of hours playing tug of war with the sea, they had their first catch; but ironically they call it ‘left-overs’. Over-fishing by the trawlers is one of the biggest challenges for these fisher folks who still rely on traditional fishing methods. Several varieties of fish have extinct due to climate change and human actions.

Danushkodi is a small town at the southern tip of the Rameswaram island, at the eastern coast of Tamil Nadu state of India. Bordered by the Bay of Bengal on one side and the Indian Ocean on the other side, Dhanushkodi is a silver land jutting into the sea. Fishermen call the Bay of Bengal- ‘Penn Kadal’, which means a ‘feminine sea’ as it is calmer than the Indian ocean, which is always rough. The sea is their protector, and sometimes it turns into destructor. It did so in 1964. A massive cyclone changed the fate of this place and the people. Nearly 1800 people died and an entire train got submerged in the sea. The state government declared the town ‘unfit for living’ post the cyclone. But that was not the only disaster that came their way. In the Tsunami of 2004, they lost their homes yet again.

Despite the fragile nature of the region, fisher folks continued to live here in thatched-roof houses. They use no technology when they set out to sail in the laps of the unforgiving sea. All they have is the knowledge about wind and weather which has been passed over the generations. However, due to climate change, everything is unpredictable. Untrained and young; the children start fishing here as soon as they turn ten. Some have lost their hands, some of lost their legs in fatal accidents over the years.

With the rising sea level and oscillating shoreline, this twenty-kilometre long strip of land and 400 families dependent on it to continue to struggle every day to survive. After 55 years of disaster, they continue to wait for the basic needs of electricity, hospital, clean water, secondary school and toilets.

Living on the edge 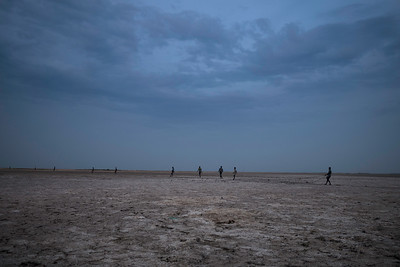